Why should you consider it?

The frequency of software releases has been steadily increasing over recent years, and so is the need for faster and more efficient testing processes. Who would disagree that test automation (even partial) can help to significantly relieve the day-to-day pressure?

However, almost every company has less test coverage than they would prefer. Why? The answer usually lies in the inefficiencies of most current test automation frameworks – resulting in: 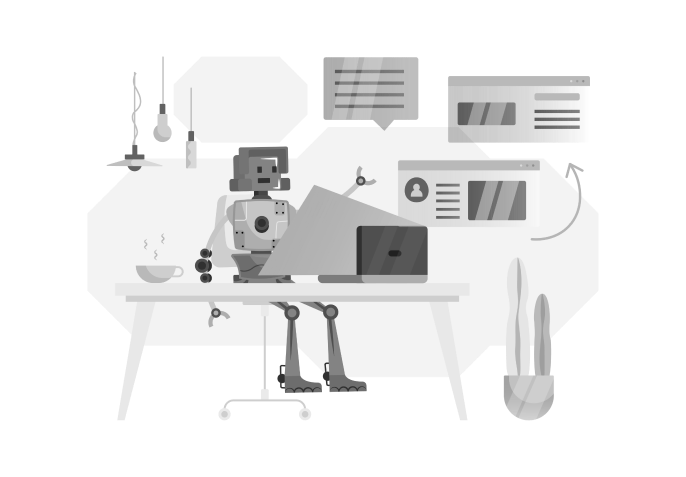 Many people would say:
💬
“Well, this is just the nature of it. You can’t build test automation and not break a sweat”

But what if you actually can?

AI testing software can be successfully used for:

Our customers have been using these features to dramatically improve their QA testing and have already run over 100 million tests on the testrigor.com platform! That’s millions of QA hours not wasted on mundane repetitive tasks, which were instead allocated toward higher value testing activities.

Does this mean QA jobs are destined to be automated out in the near future? That is highly unlikely, and we don’t see any reasons leading to it. What we predict will change, however, is QA teams becoming more robust and thriving. Think of it this way; there is always some level of disconnect between manual and automation QA people within the team. But that completely changes when everyone on the team owns both the manual and automation parts, and can fully participate in the quality assurance process from the very beginning to the end.

How can it be leveraged?

Let’s talk about the main challenges of traditional test automation.

First, it requires highly-skilled engineers – both in terms of setting up the test framework and creating automated tests. Typical automation frameworks are unforgiving when it comes to structure and architecture. What this means is, there are many ways to build tests that would produce pass/fail results – but few that would result in tests that are reliable, and are testing for the right things.

The second challenge is just as significant since it lies in the framework design. Traditional automated tests require some knowledge of the implementation details, thus are built from an engineering perspective – not from the perspective of an end-user. You don’t reference an element how a user sees it but rather utilize its id, XPath, or any other locator type. 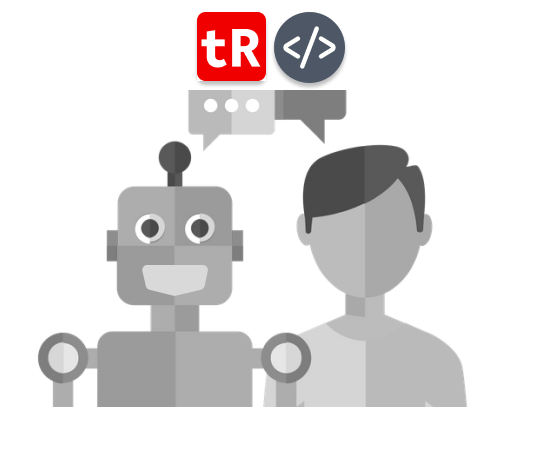 Third, due to its complexity and relatively low readability, already automated tests are rarely being revisited to assess if they’re testing for the right things, or if they’re even valid anymore.

By effectively leveraging AI in software testing, it became possible to solve all of the above issues. Let’s explain every aspect in greater detail in the next section.

What are the main benefits?

AI-enhanced test automation tools such as testRigor offer advantages over traditional automated tools in pretty much every aspect. Let’s see how these differences can directly benefit your team.

With traditional test automation frameworks, initial setup typically takes anywhere from a few days to a couple of weeks. Setup is only the tip of the iceberg, though. Writing tests is complex and very time-consuming (in case each test is properly written from scratch, not copy-pasted).

Compare it to an AI testing tool such as testRigor: where initial setup takes just 5 minutes, and creating an automated test takes about the same amount of time as writing steps for a manual one. Forget about CSS Selectors and XPaths, refer to the elements just as you see them on the screen, and the ML algorithms will do the rest for you.

This feature is unique to AI testing tools. In a nutshell, it allows the software testing tool to analyze your website and automatically create test cases based on the most frequently used scenarios. It is ideal for cases where you don’t have any UI automation test coverage in place yet. 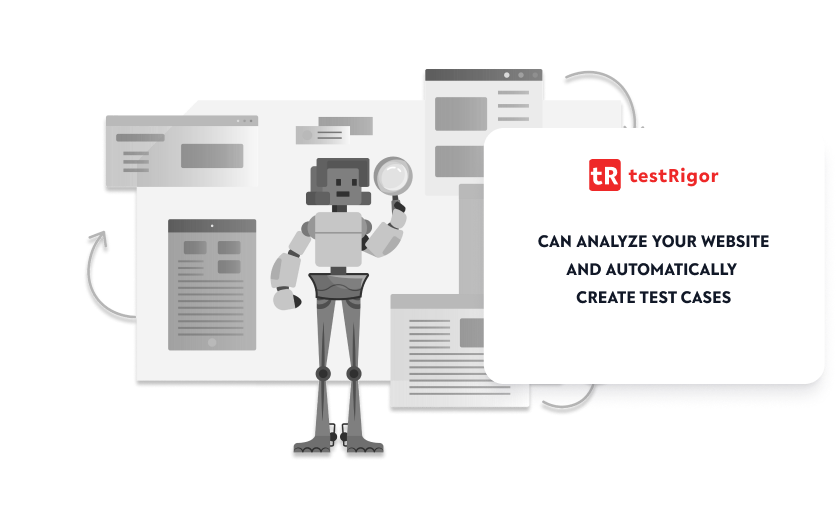 UI end-to-end tests are never 100% reliable with traditional testing tools since they have many dependencies (including third-party) by the nature of these tests. This leads to such tests breaking rather often, and maintenance of existing tests becomes a laborious daily task.

testRigor is solving these issues on multiple levels, bringing the automation experience to a whole new level: 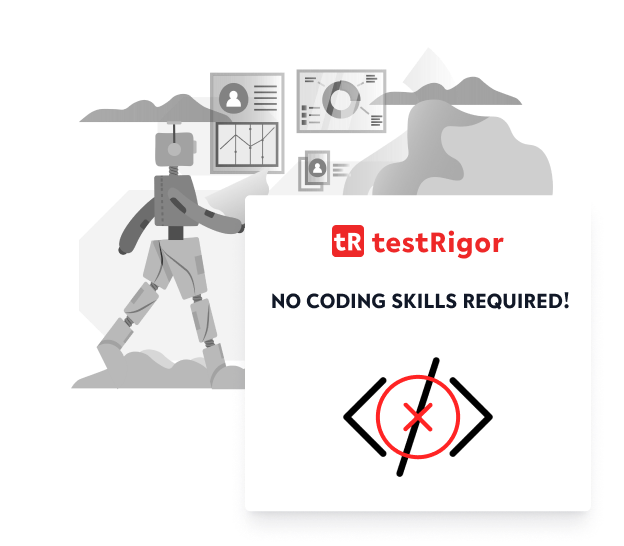 There are a lot of factors, some of which we’ve already discussed, that contribute to a much fuller test automation coverage with an AI software testing tool:

Want to know how these benefits translate into numbers? Here’s how a large telecommunications company was able to increase its test coverage from 50 to 91% in only 9 months.

Fuller test coverage results in the ability to run tests more often, and identify bugs much sooner than if tested manually or with other tools. And the QA team can allocate more time towards testing new features, defining edge cases, and building more automated tests – all of that instead of manually going over and over through the same set of test cases. Sounds like a win-win for everyone, doesn’t it?

Traditional test automation requires experienced test automation engineers for setup and test creation, and there’s no way around it. AI-enhanced codeless test automation enables everyone on the team to create the same automated tests while also making the process much more straightforward and efficient.

Cost savings don’t end here, however. As we’ve already discussed, we can now build automated tests faster, spend substantially less time on test maintenance, and have fuller test coverage. All of these benefits lead to lesser bugs making it to production, saving companies both money and reputation.

Since there’s no more code with testRigor, and all tests are written in plain English language – everyone on the team can contribute to test creation and make sense of already created tests. That promotes excellent visibility, team dynamics, and removes obstacles. An added benefit here is that it is now much easier to revisit previously created tests, modify or add more assertions, or perhaps discontinue them – if the functionality has changed.

For all the skeptical people out there: yes, general AI in its true meaning is not available yet, and isn’t expected to become available in the next 20 years or so. The reality is that AI and ML terms are being used interchangeably all across the internet. We’ll spare you the time and won’t contemplate how and why it happened, as it’s not the goal of this article. What’s important to know, though, is that testRigor uses multiple Machine Learning models to help our customers improve the efficiency of their QA testing as much as it’s technically imaginable with the latest infrastructure available. And even more importantly, these possibilities come at a reasonable price.

So how exactly is testRigor different?

This sounds great on paper, but what does it actually mean for our customers? The differences are so massive that it’s easier to show than to explain.

Here’s what the most basic automated test looks like:

And here’s the same test with testRigor:

The second example looks so clean; it’s almost unbelievable at first glance. Also, you might’ve asked yourself – where did the login credentials go, and why are they not part of the test? The answer to this is simple, and it’s just one of many perks of using testRigor. When creating a new test suite, you have an option to specify the login and password for your account. Afterward, “login” command in any test within your test suite will do just that, and if you were already logged in – simply skip it (instead of failing the test).

Quite neat, right? This is not even 1% of what you can do with testRigor. We will cover more features in the next section.

Ready to join the next era of functional testing?
Request a Demo
Start testRigor Free

What should you look for when making your decision?

Functionality & Features: traditional tools typically have many limitations regarding certain functionality. Not all AI tools will be capable of covering all/most of the test scenarios you have.

Usability: the tool should be easy to adopt and easy to use. If it’s cloud-hosted, then most of the headaches will likely be taken care of for you.

Value for money: when evaluating AI automation testing tools, many people pay the most attention to the tool’s price. However, the only meaningful metric is the end result. You ought to factor in the ease of initial setup as well as the speed of test creation. And don’t forget about the amount of time spent on maintenance! Only make your decision once you understand the above pieces well.

Debugging: how easy is it to figure out what exactly happened when the test failed? Are there detailed screenshots for each test step, perhaps even an entire video?

Integrations: does the testing tool have integrations with your other tools? Perhaps you use Jira for issue tracking, store your test cases in TestRail, and have a CI pipeline? Only a few AI-based test automation tools will be able to easily support your workflow. 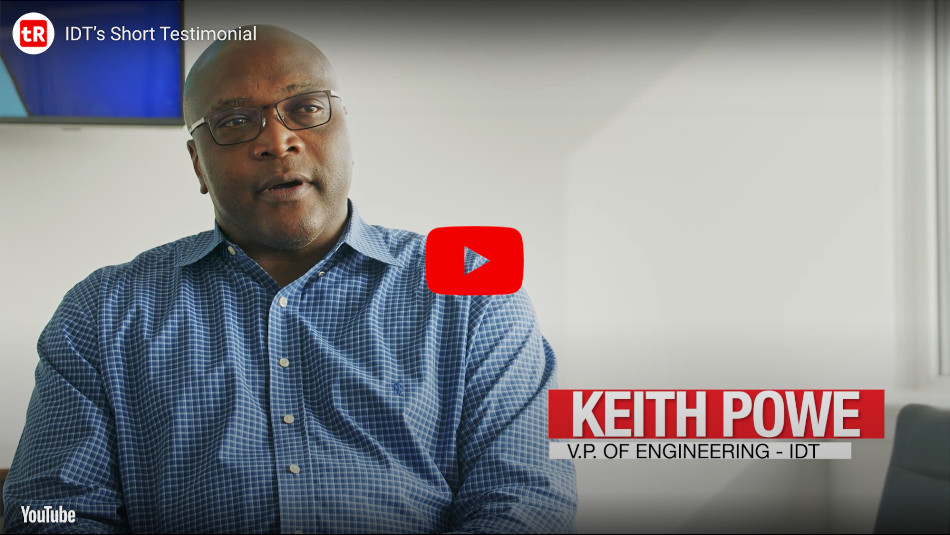 “We spent so much time on maintenance when using Selenium, and we spend nearly 0 time with maintenance using testRigor”
All Case Studies
Read The Story 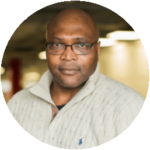 We hope that this article was insightful to you regarding how the software testing industry is being transformed by using artificial intelligence and machine learning algorithms, and you now have a better picture of the benefits it brings.

Given its many advantages, switching to a next-generation test framework might make perfect sense even if you already have fully established automated testing.

We invite you to create a free account by clicking the button below and exploring the tool firsthand. The pricing model is highly flexible, depending on the platforms you are looking to support, the number of parallelizations (i.e., how fast you need to receive the test results), the number of mobile devices, etc.